I did it again! 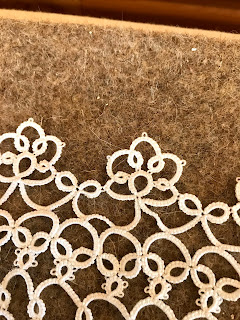 I made another big mistake on round 13 of Renulek's Spring 2021 doily. Do you see it? There's an extra section of chain that shouldn't be there. The funny thing is, I kept looking at that spot thinking that something wasn't right. I decided to do a quick press before taking a picture for today's post, and the mistake popped up as clear as day. There was nothing left to do but snip, and I snipped off nearly half of what I had tatted. 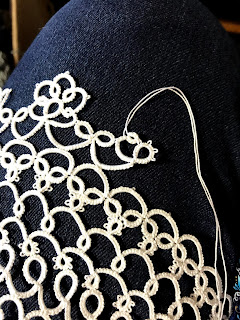 The correction has been made, and now I know of another pitfall that I need to watch for!

Playing with donuts and flowers 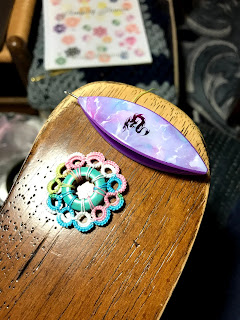 Tatting with donuts is so much fun! It's a little easier to make rings fit on donuts than on buttons. Plus, I really like the look! 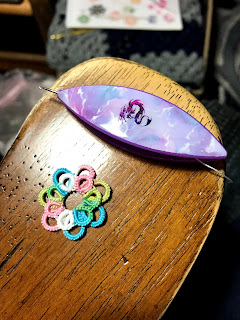 I decided to play with the flower pattern again, this time leaving off the picots. 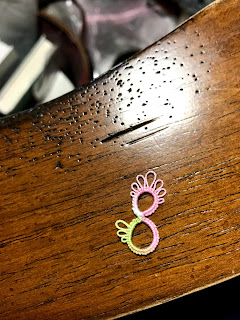 I had just a little bit of thread left on the shuttle, so I played with a couple of rings. I really am enjoying playing around! 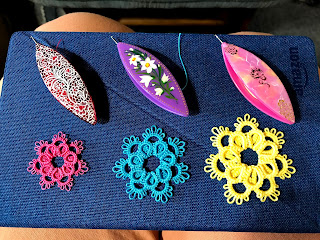 A while back, I tried tatting a flower similar to this one. I couldn't make it look the way I wanted, and I knew I had seen something somewhere. Imagine my delight when I saw what I was looking for on the cover of Mary Maynard's Tatting Rings of Flowers! Every designer has their own little tweak, and Mary Maynard's method works best for me.

I started with size 20 Lizbeth (on the left), and I got to thinking it would make a great spool pin doily for my sewing machine. It was just a little too small. So, I tried size 10 Eliza (in the middle). It's just about right. Since I had some size 5 Eliza (on the right) on hand, I decided to give that a try as well. I'll have to give the blue and yellow ones a try to see which one works best. The picots may get in the way, so once I determine which size I prefer, I'll try picots on the front rings instead of the back rings.

Flower #57 can be found on page 35 of Tatting Rings of Flowers. As Mary states in the book, once you have the technique down, the possibilities are endless! 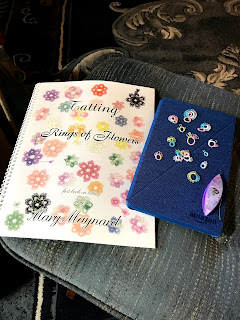 This morning I was in the mood to tat flowers, so I pulled out Mary Maynard's Tatting Rings of Flowers and played with rings all morning. It was very relaxing! My oldest granddaughter, Eva, likes to make cards. Maybe she'll want these for her card making. If not, they're easy enough to store. 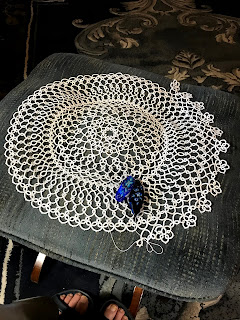 In the afternoon, I watched a movie on t.v. and worked on Renulek's Spring 2021 doily. I'm pleased to say that I've been able to keep working with all joins in the correct place!

Shuttles, donuts, and a doily 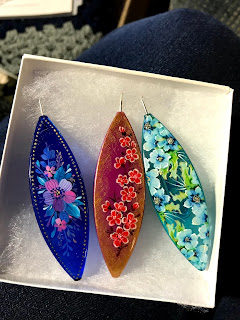 My newest shuttles from Rita Richmond of Shuttle by Design arrived today. Aren't they lovely? 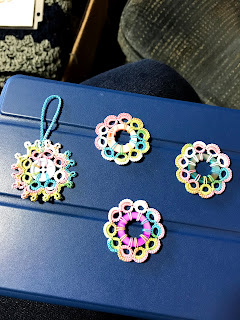 I finished a December 4 button ornament, and then I went back to the December 1 pattern and used donuts. I was inspired by my friend Pamela's latest creation. Pamela used an opaline donut and her Blue Moon hand-dyed thread. If you've never tried hand-dyed thread, I highly recommend indulging yourself. It's wonderful! 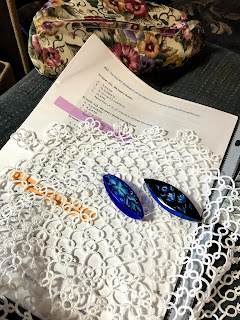 I've carefully restarted round 13 of Renulek's Spring 2021 doily. I did have a bit of a hiccup. Have you guessed? I joined in the wrong place again! Luckily, I noticed right away and only had to un-tat a small ring and 3 ds on a chain. I think I need to pay close attention from now on!

I've been working on round 13 of Renulek's Spring 2021 doily for the past few days. I didn't post my progress, because it seemed a bit boring to show pictures of just a few pattern repeats. Maybe I should have posted! 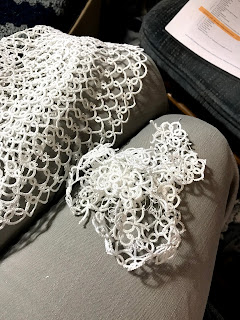 About 7:15 this morning, I "finished" round 13 and laid it out for pressing. I found a mistake, a motif joined in the wrong place. Not a problem, just a little snip, unravel, and re-tat. It wasn't difficult, but it took me about two hours.

I headed back to the steam iron a little over two hours later and found a similar mistake in another section. Sigh! I carefully snipped out the mistake, unraveled, and decided to give it a quick press before re-tatting. That's when I found another similar mistake!

The whole round looked very messy to me, so instead of fixing another mistake, I chose to snip off the whole round and start over. Maybe I'll do better starting over! 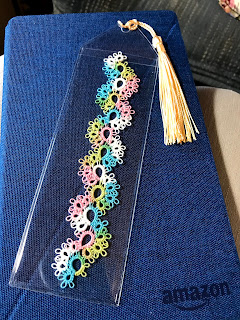 I must confess that not all of the tatting I'm posting about today was done today. I finished the Curds & Whey bookmark on Friday, but forgot to take it out of my tatting bag. 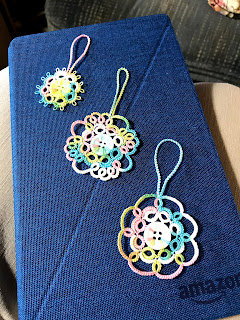 I also found another December 1 button ornament in my tatting bag. I guess I wasn't too careful about checking on Friday!