We had some drop ins this week. 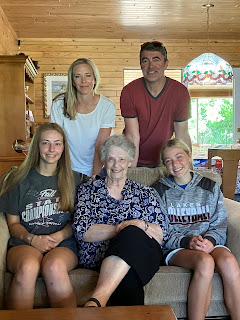 Daughter Andrea and family had plans to meet friends at Six Flags Great America on Wednesday. They opted to drive the extra hour and a half to stay with us rather than rent a motel room. We're happy they did! 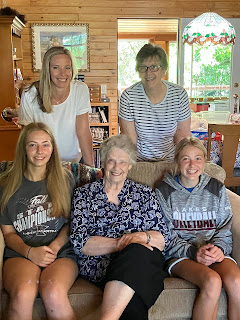 We don't get drop in visitors very often. The best part is, they will be here again in three weeks for the wedding! 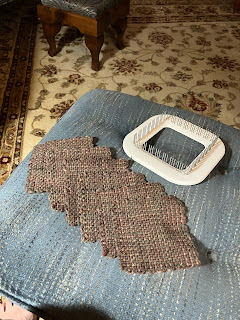 Granddaughters Lily and Ella love trying new things, so I sent them home with some pin looms and yarn. If they decide that pin loom weaving is not for them, they can bring it back in a few weeks.
It seemed like a good time for me to do a little pin weaving. I was able to weave six squares out of some yarn that I normally would have just thrown away. What will I do with these squares? I have no idea! 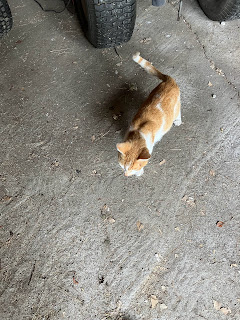 On Tuesday, our drop in was a skinny little pregnant cat. Carol named her Butterscotch Betty. Dave had set a trap for the ground hog that keeps eating our vegetables. When I took the garbage out, I found this pretty little cat in the cage. When Carol and I released her, she came right to us for some gentle rubs. We have no idea how long she's been here. She was obviously very hungry. Our guess is that someone dropped her off because they didn't want to deal with kittens. Carol made up a bed for her, and she took to it right away.
We didn't see her for a few days, but the food we put out was disappearing. We hoped that meant she was hiding to have her kittens. 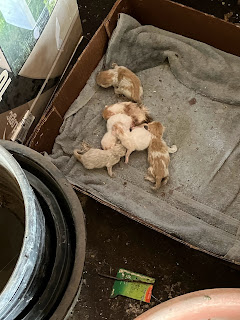 We were right. She had six babies!

She wanted to check up on me. She noticed that I hadn't blogged for a while and wanted to make sure I was okay. I'm glad she called. It's always nice to hear from her, and we had a nice talk about our de-stashing efforts! 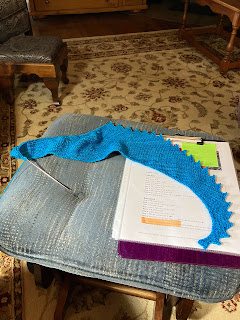 I have managed to do a little knitting each day. Today I finished 22 out of 42 pattern repeats on my Hitchhiker Shawl.

Great progress has been made upstairs, but it's not picture ready yet. I now have my craft supplies in manageable amounts. I'm amazed at how much I had in duplicate, with all duplicates now in new homes. I was ruthless about disposing of unfinished projects that I knew I would never pick up again. I still have quite a bit of de-stashing to do, but at least the upstairs doesn't look like a tornado blew through!

Carol has been over several times to help out both upstairs and in the yard. Dave has been busy cleaning the front patio. That cement slab was under the trailer we lived in for 12 years. The girls and I like to walk around it and reminisce about where everything was located in that trailer. The flowers are soaking up the sun in anticipation of the wedding day. They're tropical flowers that need full sun. They won't be relocated until the wedding day since most of them will be in shade for the day. 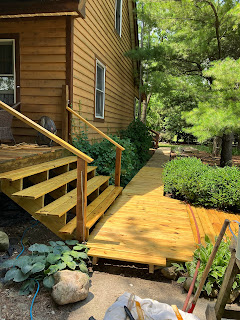 Dave finished the stairs, railing and part of the walkway. Carol treated them. 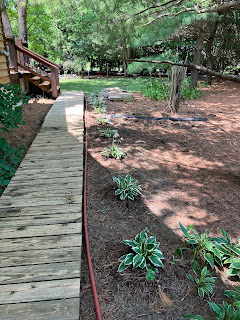 This section of the walkway needs to at least be treated, but we're thinking of replacing 33 boards. A lot will depend on whether there's enough time before the wedding. I'm guessing that the boards won't be replaced until next year. Dave planted some new hosts to dress up the path. 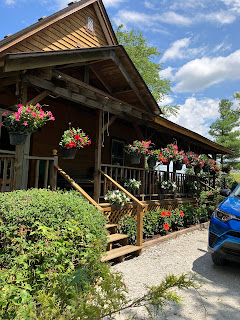 We typically have hanging baskets of flowers along the south side of the house. This is not just in preparation for the wedding! 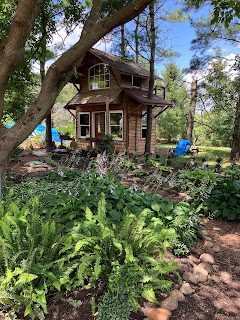 Dave has been busy cleaning up the hosts beds and paths. He added flower boxes and two little garden beds in front of the treehouse. 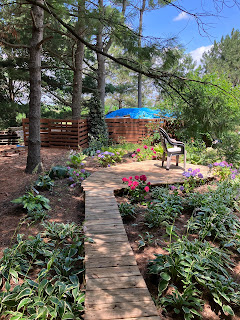 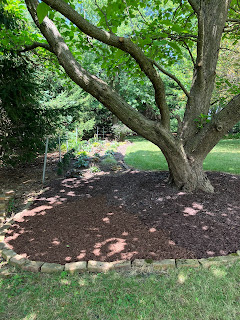 Another hosts bed was planted out back. Carol mulched around the catalpa tree yesterday. 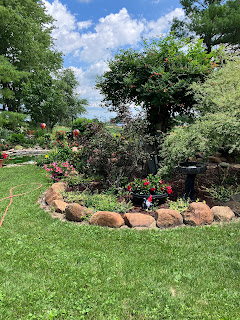 The trumpet vine has been trimmed and staked. There's still some trimming to be done in this garden. 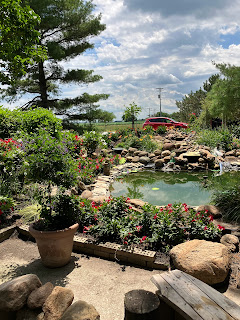 The pond has been cleaned, and Dave fiddled around with the waterfall to make it more like he had originally envisioned it. 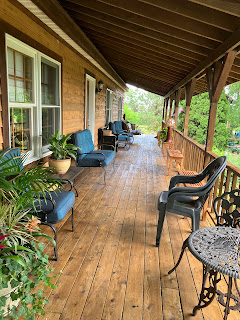 The front porch has been power washed and stained. It's ready for company! 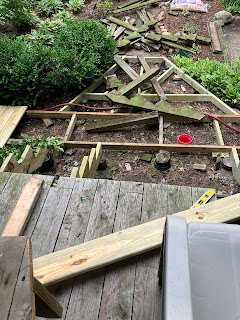 Working around the yard in preparation for the wedding has forced us to take a good look at projects that really needed to be done. Dave was going to just spruce up the steps at the north side of the porch, but found that the wood really needed to be replaced. He's working on finishing it up right now, with the hope of staining it in the next day or two. 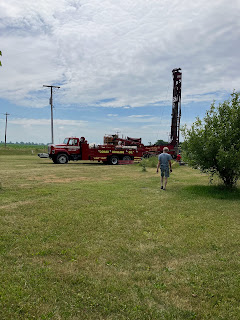 Our big surprise this summer was finding out that we needed to dig a new well. Luckily, a good friend of Dave's works for a drilling company and he was able to speed up the permit process and get things moving. The drilling was done today, and tomorrow they will hook up everything. 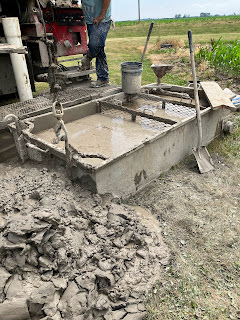 I was amazed at the amount of clay that came out of the ground. At this point, they were about halfway through the drilling process. If only I knew how to make things out of clay!

Carol and I went shopping for flowers last week. We were advised to purchase artificial flowers for her wedding arbor, and we had great fun choosing what would look best together. There are lots of pictures, if you feel like looking! 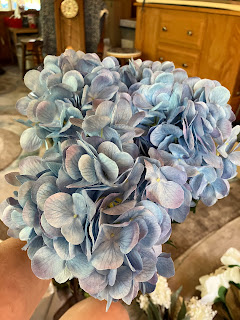 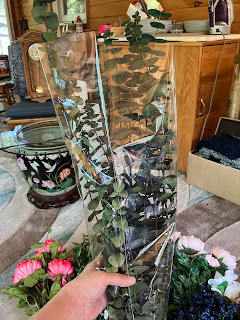 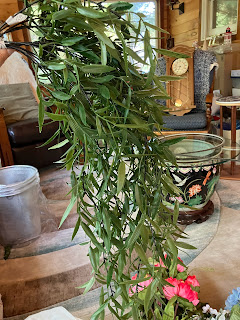 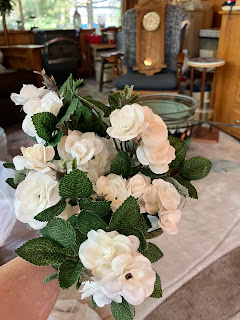 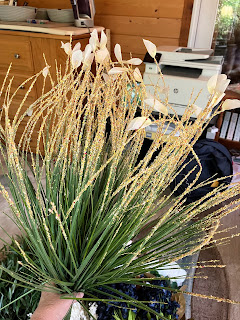 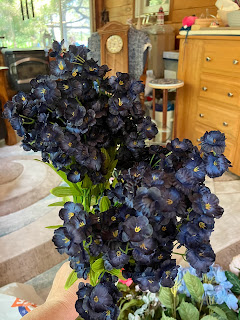 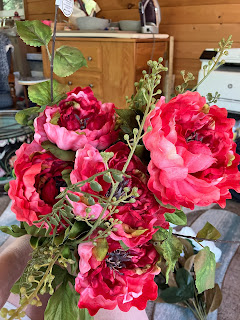 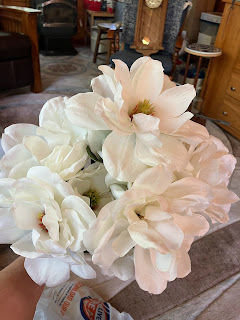 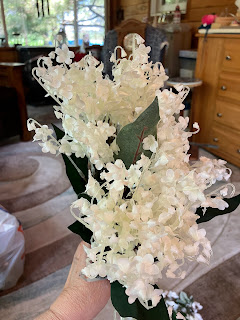