I love my Mac! What else can I say? I use PCs at school, so I'm very familiar with both operating systems. I just happen to prefer my Mac!

Anyway, a week or so ago my mom told me about a program she found called NoteBook. Have any of you Mac users tried it? You can try it for free for 30 days. Of course, I love free trials! I'm hooked! I've been organizing my crafts with tabs like Blogs, E-mail, Patterns, Projects, etc. That means I've spent very little time crafting, but I'm feeling so much more organized. I've even started a list of books I want to read! You can try the program out at http://www.circusponies.com/.

Another Apple note... daughter Alison has downloaded an app for her iPhone called BestCamera. Some day I hope to own an iPhone, but for now I'll just enjoy learning from Alison. The app allows you to use filters to change the look of your photos and then post them or e-mail them to friends. She took a very cool picture of the ceiling fan in her bedroom. I'm not much of a camera person, but some of the apps that are available make me want to delve even further into technology. If only I had more time to play! 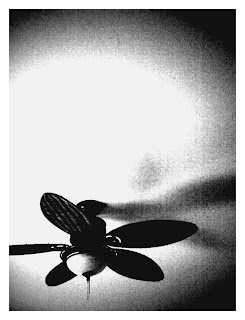 As for tatting... I totally messed up my motif from the Japanese Book... on the last join of course. It's been after dark when I've had a chance to sit down and tat. I just can't seem to focus well enough at night to fix my mistakes, so later today I'll take time to try and undo that oopsie. It's such a pretty motif! 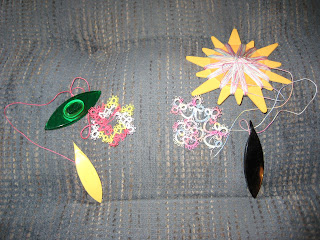 Inspired by Fox, I've gotten back into tatting my coaster motifs. The Japanese motif was an attempt to add variety to my coasters. I may still try to use the Japanese motif, but for now I'll focus on what I know works!

I finished my first striped sock, and have started the second. Again, I've finished a sock with a pencil point toe. Maybe the toe will change when the socks have been washed. I think I'll use a different pattern for the next pair of socks, though. This is the only sock pattern I've knit that gave me a pointed toe! The legs seem awfully skinny to me, but I'll reserve judgement until I've completed both socks and tried them on. I'm not trying the first sock on yet. I'm afraid I'll become discouraged and not finish the second one! 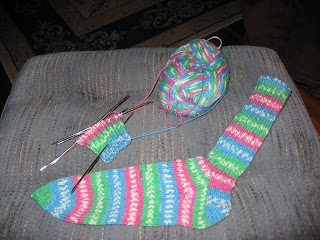 Posted by Lace-lovin' Librarian ~ Diane at 9:37 AM