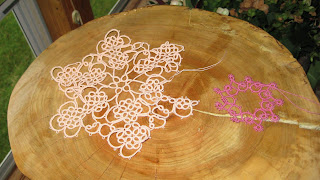 It is so easy to post about my successes, but I have a difficult time admitting my mistakes. Here are two mistakes that have kept me from posting for over two weeks! Yes, I've been having difficulty with Stella Alpina. Why? I've tatted this doily several times, so it's not that I'm unfamiliar with the pattern. I've cut out or retro-tatted at least six sections of this doily. I thought I was nearly at the end, when I discovered that I had missed a join in the very first section! I tried fixing it without cutting out the offending section, but it just didn't work. I ran out of thread on one of the shuttles, so I just cut off the whole thing, and I'm setting it aside until later. I love the color. I love the doily... but, I can't stand the mistakes!

Yesterday, I decided that I would enter the 25 Motif Challenge for a third time to help me focus. Since I've been having such a hard time reading patterns, I thought I'd turn to one of my favorite little books, Tatting by Myra Piper. Simple, right? Wrong! I was doing fine until the end of the motif. I took out the next to the last ring four times before I realized that I didn't need to make the join I was trying to make! I was tatting away merrily this morning, loving the thunderstorm outside, and when I finished I cut my threads so that I could tie off the motif. That's when I noticed I hadn't completed the motif! 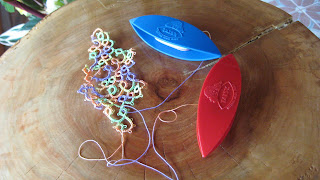 Thank goodness, I have a Spinning Wheel glass mat in progress to help me de-stress!
Posted by Lace-lovin' Librarian ~ Diane at 9:36 AM