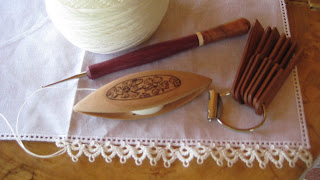 My youngest daughter, Joanne, is getting married August 1. I've had a hanky sitting next to my tatting chair since Easter, and I've been trying to decide which edging pattern to use. I really had planned on using one of Mary Konior's patterns, but every time I tried to make a sample of one, I'd become over-confident and make a mistake that could not be ignored. Yesterday I tried test-tatting three different edgings, and on each one I made a mess of the second pattern repeat. I guess my brain is on vacation with the rest of me!

This morning I opened up A Tatter's Workbook by A. Tatter, edited by Jules & Kathe Kliot. The second pattern in the book really appealed to me, and I found I was able to follow the pattern with ease. I guess you can tell by the look of it that it's really not a complicated pattern! It was just what my poor brain needed!

I hope I can start tatting a little faster... this took me 2 1/2 hours! Of course, I was a little distracted. I was watching The Guns of Navarone while I tatted. Gregory Peck made such a handsome leading man, and I love his voice!

P.S. - The tatting shuttle and picot hook are from Grizzly Mountain Arts. The picot gauges are from Lacemaker U.S.A. I'm tatting the edging with Cebelia size 30.
Posted by Lace-lovin' Librarian ~ Diane at 4:10 PM