Yes, it's nasty out there, but does it really count as a blizzard? I'm not sure. In the years that we've lived here, I've seen snow storms that dumped more snow at a faster rate, and we've had sustained high winds that prevented me from seeing the shed from my front door. That didn't happen this time. Still, I know we won't be going any where today, and possibly tomorrow. 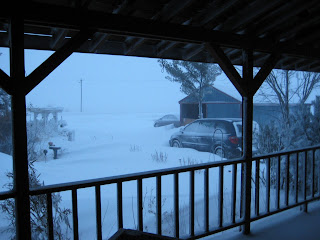 This is the view from my front door. I think it's going to take a while to move this stuff! I remember the winter of 1983/84. The snow drifts in front of the shed were 15 feet high, so we could only see the peak from our front door. Daughter Alison remembers climbing to the top of the drift and sliding down. 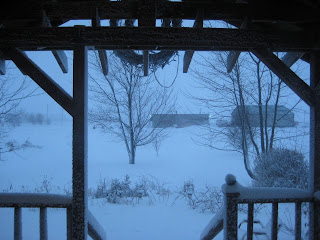 Looking out the back door, things don't seem so bad. The snow is about 6" deep on the ground, and about 3" deep on the porch. Everything looks so serene! 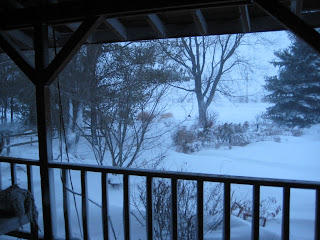 Looking to the left from my front door, we can see some awesome drifts, evidence that the wind was, indeed, blowing. It's snowing some more right now, and the prediction is that it will snow until noon. We'll be okay as long as the wind doesn't kick up. Dave's out taking pictures right now... I think he's having fun! 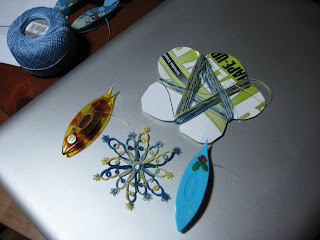 So, what's a girl to do when she's snowed in? Tat, of course! A while back, Fox sent me some thread samples. Was it Valdani? I have a terrible memory, and I'm too lazy to go back and look. Any way, I wound thread onto one of my tortoise shell Clover shuttles, and my pretty little shuttle from Tatting-Marie. I love the way Mary Konior's "Star" motif turned out! The finished size is 2 1/2". 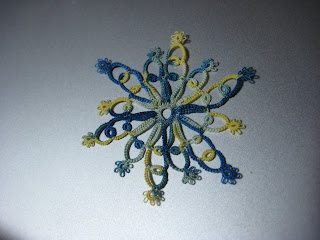 I think I may be on the verge of a "Star" binge! The pattern can be found in Tatting Patterns by Mary Konior. I hope you're lucky enough to own a copy of this book. I think it's fantastic!
Posted by Lace-lovin' Librarian ~ Diane at 7:08 AM