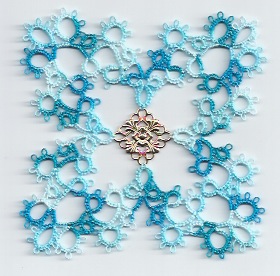 Yup, that's me! Yesterday I tatted the last ring of this pretty little motif, Toshti, designed by Jon and named by Fox. When I finished the ring, I realized that I had joined it to the wrong picot. I tried to retro-tat, and I managed to tighten one of the knots tighter than I had ever done before... not a good thing!

I spent hours trying to get that knot out... at least three hours yesterday, and at least an hour today. Finally, I decided to take the scissors and snip the darned thing out. After all, I could have re-tatted the whole motif in that time!

I very carefully tatted and joined the last ring, and to my dismay, I realized that I never needed the ring in the first place! I had forgotten to join the last clover to the correct ring. I took out the last ring and just did a little sewing to join at the forgotten spot. I did consider retro-tatting to fix the join properly, but I had already spent way too much time in this one spot. You'd better believe, I won't be making that mistake again!