I'll admit that I was a bit frustrated with the DMC Diamant that I'm using. The ends fray quickly, which isn't too much of a problem while tatting, but it is a problem when weaving the Dorset buttons.

Then I had an idea early this morning. Glue! Years ago, I learned from Nina Libin to needle my thread. To do that, use a dab of Elmer's Gel School Glue on the end of the thread. It only takes a minute or two for the gel to dry, and the thread is then stiff enough to use as a needle. I use this method when adding beads. It's so much easier than trying to thread a needle with thread on it through a tiny bead. 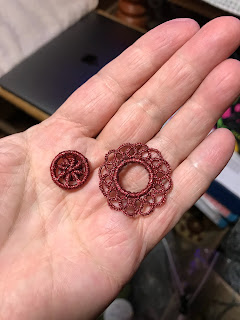 I gave it a try, and it worked great! Putting a dab of glue on the end does not prevent the thread from untwisting, but it does keep the ends from fraying. I can deal with twist or lack of twist.
I do need to pay close attention when working with this thread. I was talking with Mom while I was tatting, and I accidentally added an extra picot and four double stitches to one of my rings. It took me an hour to get those four stitches un-tatted.
I also need to stop playing thread chicken. I have more thread than I will ever be able to use, but I still try to salvage every last bit. Today I was caught short. I made a Crosswheel Variation Dorset button using a nice long length of thread. I foolishly thought I had enough thread to make another. Nope. I had enough to cover the ring, and that was it. I fiddled with the thread for a few minutes and then decided to give up. Instead, I just added the tatting around the ring. If I have time, I'll make the coordinating ornaments tomorrow. Even though this ornament doesn't have the Dorset button center, I think I'll be able to use it in my project.
I did wok on my granny square afghan this morning, but I didn't even make it around the afghan one time. Needless to say, there was nothing picture worthy!