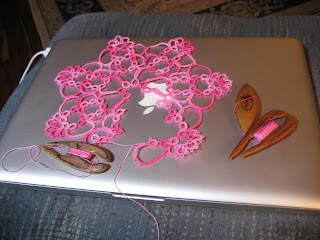 Yes, the end is in sight, but I probably won't finish Beatrice until next week. We have a weekend of excitement here in little Grant Park... the middle school production of Seussical Jr.! I'm not directly involved, but as the mother of the director I take on the role of "go-fer" and wind up with lots of last minute responsibilities. Luckily, I remembered to ask Dave to load the concessions in the van before he left for work this morning. There's no way I could have lifted those cases of water! He also was a dear and washed the coolers.

After taking my Beatrice photo of the day, I put the camera battery in the charger. Last year I took pictures during Oklahoma!, but I hadn't charged the battery, and it ran out of juice about 3/4 of the way through the play!

Performances are tonight and tomorrow night at 7, and Sunday afternoon at 2. At 6 tomorrow there will be finger sandwiches and desserts for those who bought advance tickets. It's always a fun time, but there's always a ton of laundry and loads of dishes to wash afterwards!

To add to all the excitement, Carol (aka Madame Director) is getting sick... horrible cough, losing her voice, no energy... so I've been trying to make healthy germ-fighting meals this week. I have a feeling Carol's just going to collapse when she gets home Sunday night.

So, I'll tat a little bit here and a little bit there for relaxation, but I have a feeling it will be the middle of the week before Beatrice is shown in all her glory!
Posted by Lace-lovin' Librarian ~ Diane at 5:49 AM