I'm sure you've seen Fox's beautiful rendition of Jon's new pattern for doodads, Toshti. I'm amazed that Jon was able to come up with such a beautiful pattern with no doodads on hand! That situation will soon be remedied, because I sent her some today.

I looked at the pattern differently than Fox did, with the following result... 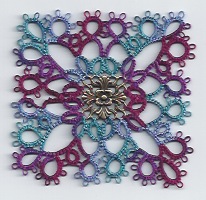 Since I started the pattern and joined to the doodad where I did, I had to leave out the clovers. I should have had the clovers at the four corners of the doodad, and then I would have achieved a result similar to Fox's. My version turned out to be very fiddly near the end, because I was trying to work in a tight space.

Jon has approved my version, and she'll work on tweaking the pattern once she has the doodads in hand. I'm sure she'll release her pattern to the tatting world very soon, so be on the lookout! I know I'd be thrilled to see a whole book of doodad patterns. Put me on the list please, Jon!
Posted by Lace-lovin' Librarian ~ Diane at 8:23 PM