Mom and I went to get our hair cut this morning, and then I spent the rest of the day playing with thread! 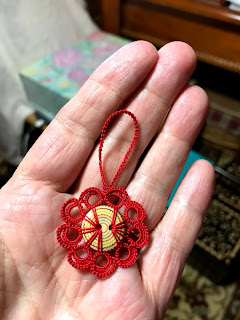 My blog posts will probably be pretty boring for a while. I have quite a selection of buttons and donuts that I plan to tat around with size 40 Lizbeth #669 Poppy Red. My December 1 button ornament pattern is pretty simple and tats up quickly, and I want to be sure to have plenty of ornaments for Christmas in the Village! 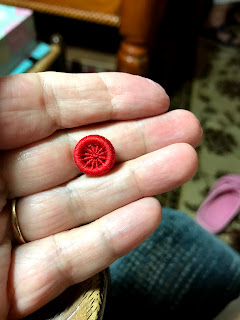 I plan on having some Dorset Crosswheel centers, so I'll be stitching up some of them as well. 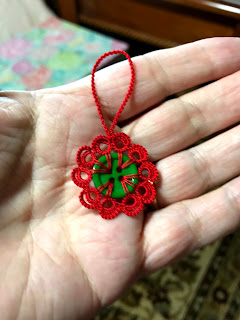 My 5/8" four hole button stash doesn't seem to be getting smaller, even though I feel like I've been going through them like crazy! 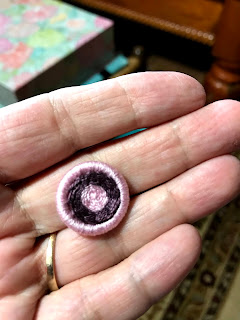 It took me a while to figure out the Dorset Crosswheel variation. This was another one of those times when I wondered why I found it so difficult once I was finished! 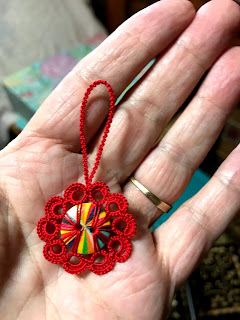 I gave away most of my 5/8" two hole buttons, but I found some more so I might as well use them! 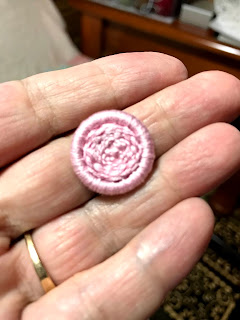 My final button of the day was supposed to be a Lychett Basket. This looks nothing like the picture on the pattern page! I'll use it as a center for a button ornament, but I know I'll be much happier when I create one that looks like the pattern picture!