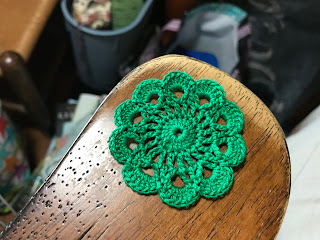 I have so much crochet cotton around, I feel I have to use it up or give it away. It's amazing how long one ball of thread can last. I decided that it would be nice to have a box of spool pin doilies just in case. So, I crocheted a spool pin doily this morning. 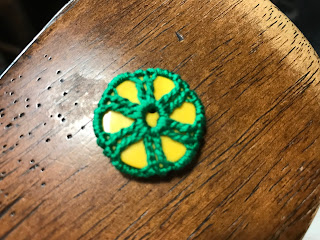 Then I got to thinking about Dorset buttons. I've been wanting to try those for a long time. However, it was easier to crochet around a button. I found a tutorial on YouTube that was different from anything I had tried before. The front reminds me of a Dorset button. 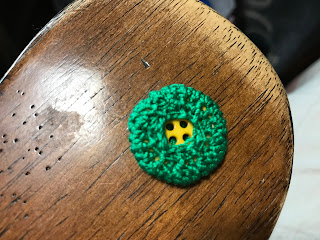 The back is snugly encased. This crochet button cover was pretty easy to do, but it didn't inspire me. 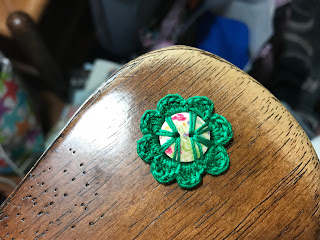 I watched another YouTube video about crocheted button flowers. The tutorial used chunky buttons and DK yarn, which I have, but I wanted to do thread crochet. I followed the tutorial using size 10 cotton and my little buttons. It turned out pretty good.

The big difference between this button flower and the ones I did a few years ago is the number of petals. I think I prefer the ones I made with five petals, but I think this one might curl less. 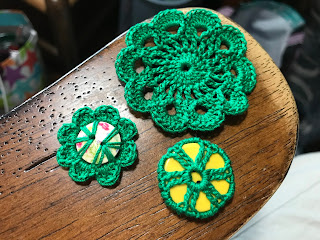 I had these three pieces finished before 9 a.m. It's kind of nice to work on quick and easy projects! 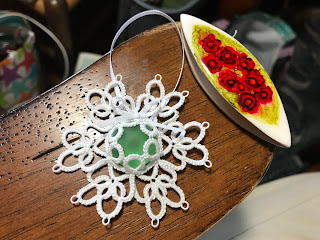 I wanted to tat another Ice Drop today, and it's been a while since I've tatted my Blue Fudge Ice Drop. This is not one of my favorite Ice Drops, but I wanted to review the pattern. Guess what? It worked! The beautiful shuttle is from Grizzly Mountain Arts. I do love using beautiful tools!
Posted by Lace-lovin' Librarian ~ Diane at 9:20 PM