Yesterday was a busy day of organizing, cleaning, grocery shopping, and doing laundry... mundane things that need to be done! Since I was a good girl and put chores first, I did not sit down to tat until after dinner last night. Even then, I was so tired, that I didn't finish the one Ice Drop I started until this morning. 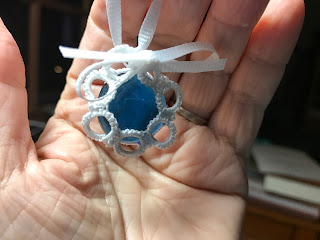 I do like this deeper blue. You can't tell from the picture, but this is another one that is a bit loose in the bezel setting. The glass gem was too large for six rings, so I chose to tat seven rings. It's fine while it's hanging on the tree, but the gem pops out easily. I decided a fix was in order!

A search on the Internet led me to an Italian YouTube video about needle tatting with a cabochon. After watching it, I decided to do a little bit of experimenting. 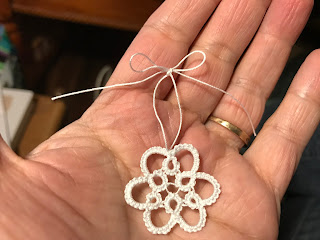 First, I tatted this little piece as a backing. It was not large enough, so I just tied it off and hung it on my tree. 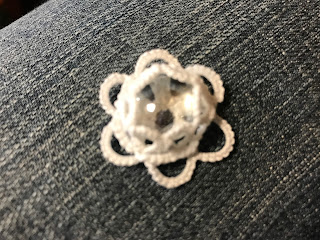 My next attempt was much better! 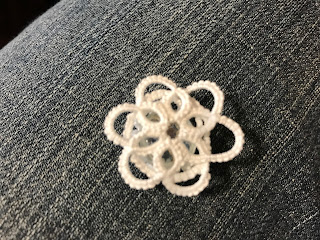 I like the way the back encloses the cabochon. 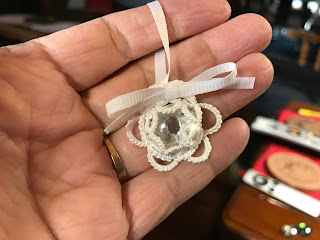 This gem was a little smaller than the ones I've been using. It's a little loose in the setting, but I feel like it is much more secure than the blue one. The real question is, can I remember what I did so that I can make more?
Posted by Lace-lovin' Librarian ~ Diane at 10:16 AM