If you've been reading my blog, you know that I was not happy with the way my first Cubs Spinning Wheel turned out. 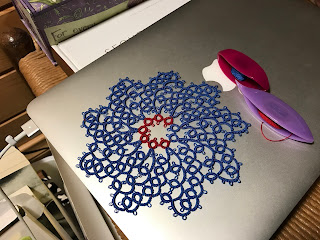 I'm much happier with this one! As I mentioned previously, it did mean that I had to use the shoelace trick after almost every ring and chain. It was worth the extra time and effort. 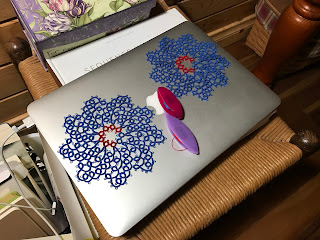 It might be difficult to see the differences between the two from a picture, but if you were looking at the two side by side, you would be able to easily tell which is the better Spinning Wheel.

I've been given a couple of other ideas that I'd like to try out. Eliz suggested using split rings for the center and then tatting the spokes in the normal way. If I ever manage to get those split rings going, I think it will work well. Muskaan suggested mock rings, something I never would have thought of doing. It's been a while since I've practiced mock rings, so I guess that's another technique I need to work on.
Posted by Lace-lovin' Librarian ~ Diane at 8:18 PM