I spent too much time tatting on Thursday, and I could really feel it in my hands yesterday. So, I took it easy with tatting on Friday, so easy that I forgot to blog about my day!

Granddaughter Eva is reading The Hiding Place by Corrie Ten Boom, a book that I've had for a long time, but have never taken the time to read. I'm now halfway through it! 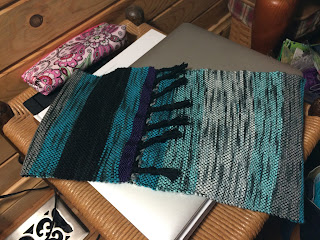 I finished up a cowl that I had on the loom. I hemstitched each end, tied the fringed ends together, trimmed the fringe, and then braided it. I really like the way it turned out! 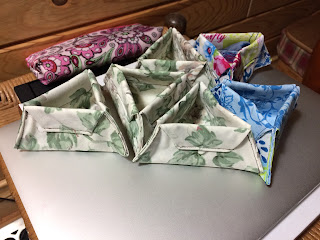 Marie has been going crazy making these adorable little trash cans or thread catchers. The original pattern I followed had triangular tips like Marie's, with buttons holding down the three corners. I'm not sure if this is the pattern I followed or not, but there's a nice tutorial here.

However, I was feeling a bit lazy today and I did not feel like looking for buttons and sewing them on, so I followed this tutorial on Craftsy. I like that this pattern is all machine stitching, making it much faster to put them together. Of course buttons or charms can still be added to give them a little pizzazz. It does take slightly longer to cut out, because there are three extra cuts to remove the tips of the triangles. Also, there are six corners to trim instead of three before turning.

I think this is a great way to use up scrap fabric (two 10" squares are needed), and since they're so easy and quick to make, they're a great giveaway! 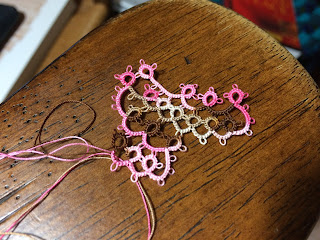 And yes, I did take a little time to tat today, but my goal was to give my hands a rest, so I tried not to get carried away! ;-)

The thread is size 80 Lizbeth, Pink Cocoa #166. I try not to use this thread too often, as I get cravings for chocolate and strawberries!
Posted by Lace-lovin' Librarian ~ Diane at 6:36 AM